The Harlem Children's Zone Project is an example of what we must do to rebuild our community's infrastructure. We will all have to involve ourselves and do whatever it takes to insure that this and programs like it thrive every where there are children in need of upliftment. We all have to do our best to raise the funds to make it happen. Our children deserve a stake in the future of this country and we can make it happen, as the work of Geoffry
Canada has shown us. 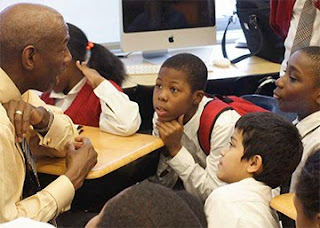 The following is a quote from a regular member of the Black Web Portal Forum. I think he sums up quite nicely what many African Americans feel about the hunt for Bin Laden and the "Al Qaeda terrorists." He also correctly points out the lack of concern on the part of these defenders of freedom, for the well-being of our brothers and sisters on the "homestan".
Right on dawilliams!

Well folks you gotta hand it to the military industrial complex. To perpetuate themselves they cook up this huge terrorist threat with this rag tag band of religous fanatics called AlQaida led by a guy named Osama 'Ali Baba' Bin Ladin. This dude just happens to have several family members living in the U.S. at the the time of the 9/11 attacks in September 2001. By the way you will recall these family members were quickly spirited out of the United States to Saudi Arabia. He is supposed to be the mastermind behind these attacks.

He puts out more videos than the late Michael Jackson. He lives in a cave. He goes on Arab TV and he supposedly has bad kidneys. Now if the United States can send a robot to Mars a planet millions of miles away from earth and have said robot explore the caves of Mars why then can't they find a guy who is supposed to be such a threat and living from one cave to another right here on earth in a third world 19th century country called Pakistan. He supposedly goes back and forth from one cave to another between Pakistan and another third world country called Afghanistan which is an 18th century country.

The U.S. has spent billions of dollars in defense materials to find this dude and his buddies. Day by day we hear of the body count of Al Qaida supposedlly killed. Sound familiar? How many of these people killed were actually Al Qaida? How many were innocent civilians?

The military industrial complex needed an enemy to justify its horrific spending habits and exhorbitant defense contracts after Russia collapsed. They found a perfect patsy in Al Qaida and the socalled threat of world wide terroism. Gimme a break!

One day the U.S. is fighting in Waziristan, then its Pakistan, then its Afghanistan, then its Turdestan! Dayum One stan after another. I would appreciate it more if they would start spending more money in Chicagostan or Harlemstan, Oaklandstan or LosAngelestan!
Feel Me?

Is an Organized African American Consumer Base Possible?

The Carrot Mob model is a possible means to stimulate some employment and possibly other changes in the way businesses deal with African Americans.

Carrotmob is a method of activism that leverages consumer power to make the most socially-responsible business practices also the most profitable choices. Businesses compete with one another to see who can do the most good, and then a big mob of consumers buys products in order to reward whichever business made the strongest commitment to improve the world. It’s the opposite of a boycott.
read more

I propose we adapt this model to consolidate our buying power and take advantage of something we already possess -our present consumer power. It surely can't hurt to study the model since it appears to be working for the "Greenies".
This technique is one possible means of competing with companies that are lobbying government for bills that are counter productive to our needs. For example we reward the companies with fair hiring practices and companies that lobby for things that benefit us. One possible name. Cocoa Mob.

It doesn't stop there we can join forces with the Carrotmob at times and create an even stronger consumer interest base.
Posted by Prospector at 11:21 AM 1 comment: Links to this post

It seems that the Congressional Black Caucus has a bone to pick with President Barack Obama. The 43-member group recently agreed to boycott a vote on a financial overhaul measure as a sign of protest toward the Obama Administration. The bill easily passed, but Rep. Maxine Waters made it clear that the caucus could cause trouble for future Democratic bills by voting with the Republicans. The protest was in response to what the CBC considers to be a blatant disregard for African American issues by the Obama Administration.
In response to the recent actions by the CBC, I only have one thing to say: Great move.
While I applaud the Congressional Black Caucus decision to stand tough when dealing with the Obama Administration, this move is not without it's problems. As the CBC swims into the dangerous realm of critiquing President Obama, a few points should remain clear:
1) The CBC is not attempting to tarnish Barack Obama's presidency. By standing strong, they are helping him to do his job more effectively: In politics, only squeaky wheels get oiled. Representative Maxine Waters has become Obama's new Jeremiah Wright, as she has made the Obama Administration uncomfortable by asking all of the really tough questions and calling for Presidential accountability. The problem is that unlike Jeremiah Wright, President Obama can't get rid of Maxine Waters, who is an entrenched figure in national politics. Waters, as well as Rep. John Conyers, understands that if you don't negotiate tough on Capitol Hill, you are going to get ignored. Thus far, the president has largely dismissed nearly all concerns of the African American community, in large part because he knows that black people are never going to complain about his performance. Barack Obama could join the Ku Klux Klan and African Americans would still give him a pass. By holding the president accountable, the CBC is doing its job of ensuring that its black constituency is near the top of the president's list of priorities, since he has thus far spent his time catering to those who hate him the most. George Bush was a terrible president, but at least he took care of his friends.

read more
Posted by Prospector at 2:58 AM No comments: Links to this post