LOS ANGELES — Jurors resumed deliberations in the murder trial of Johannes Mehserle this morning.
Today should be the first full day of deliberations for the jury in the BART shooting case. Jurors received the case last Friday afternoon. The jury then had a three-day weekend due to the Fourth of July holiday and deliberations were canceled Tuesday due to the illness of a juror.
On Wednesday, the jury only met for half a day because another juror had a medical appointment. Also on Wednesday, Los Angeles County Superior Court Judge Robert Perry dismissed a juror who had a planned vacation and replaced him with an alternate juror. The replacing of a juror meant the jury had to begin deliberations anew on Wednesday, disregarding anything they had talked about last Friday afternoon.
Former BART police officer Mehserle is charged with the murder for fatally shooting Oscar Grant on the Fruitvale BART platform New Year's Day 2009. The 22-year-old Grant was shot while both Mehserle and fellow former BART police officer Anthony Pirone were attempting to handcuff the Hayward man. Mehserle testified during the trial that he did not intended to shoot Grant but instead wanted to use his Taser because Grant was resisting arrest.
Jurors must decide if Mehserle is guilty of second-degree murder, voluntary manslaughter or involuntary manslaughter, or acquit him.
The jury, which began deliberations at 8:45 a.m., is expected to deliberate
until 4 p.m. today.
Posted by Prospector at 2:20 PM 2 comments: 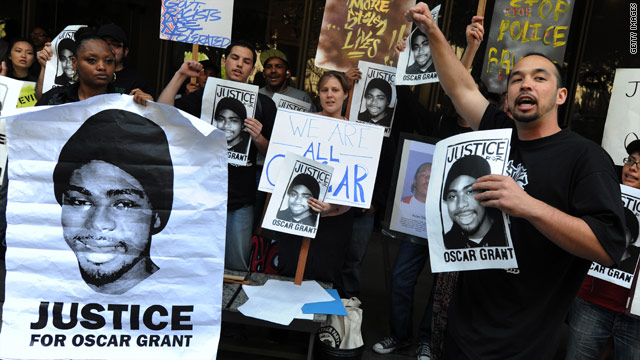 Posted by Prospector at 1:41 PM No comments:

Venezuela's first flag was stitched together on the shores of Haiti in 1806 before being carried across the Caribbean by revolutionary hero Francisco de Miranda. Ten years later, Latin America's founding father, Simón Bolívar, would set sail from Haiti loaded with guns and Haitian soldiers on his way to liberate much of South America from the Spanish.

It's a historical debt that Venezuelan President Hugo Chávez says his country will never be able to repay. But in the wake of Haiti's devastating earthquake, the South American nation seems bent on doing just that.

read more
Posted by Prospector at 1:28 PM No comments:

An African American man, Curtis Flowers, made history this week when he became the first person in U.S. history to ever go on trial for murder six times for the same crime. Mr. Flowers has been in jail in Mississippi since 1996, accused of the murder of four people at a furniture store. Jury selection started this week in tiny Winona, Mississippi, population 5,482.

Posted by Prospector at 12:59 PM No comments: