"He was denounced by critics as buffoonish, homophobic, antisemitic, a demagogue. He was called by others a genius, a prophet, the Malcolm X of literature. Eldridge Cleaver hailed him as the bard of the "funky facts." Ishmael Reed credited the Black Arts Movement for encouraging artists of all backgrounds and enabling the rise of multiculturalism. The scholar Arnold Rampersad placed him alongside Frederick Douglass and Richard Wright in the pantheon of black cultural influences."
The Guardian

The following is just one example of the type of energy Baraka put into his art.
Amiri Baraka class on revolution and art - Part 1 (August 7, 1985)
First half of a class by Amiri Baraka on revolution and art. The discussion covers Miles Davis, the Poetry Orchestra Project, formalism, relationship of society to art and film, satire vs. social protest, Ed Dorn, black literature, Henry Jones, W.E.B. DuBois, and Mark Twain

This audio is part of the collection: Naropa Poetics Audio Archives
It also belongs to collection: Audio Books & Poetry

See article in NJ.com for more details of Brother Baraka's Passing.
Posted by Prospector at 4:59 PM No comments: 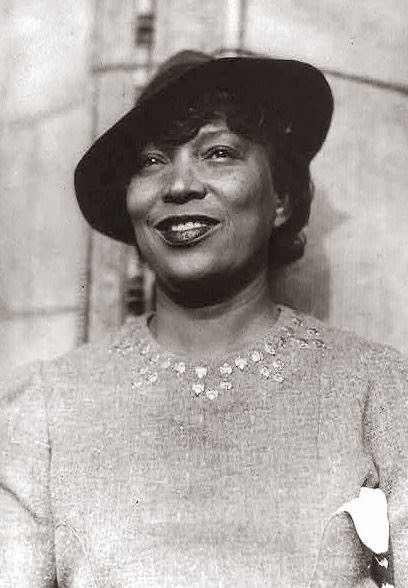 Click below for the Audio Bio
#HerStory 48: Zora Neale Hurston by Tonya Matthews

Hurston was the fifth of eight children of John Hurston and Lucy Ann
Hurston (née Potts). Her father was a Baptist preacher, tenant farmer,
and carpenter, and her mother was a school teacher. She was born in
Notasulga, Alabama, on January 7, 1891, where her father grew up and
her grandfather was the preacher of a Baptist church. Her family moved
to Eatonville, Florida, one of the first all-black towns to be
incorporated in the United States, when she was three. Hurston said she

always felt that Eatonville was "home" to her and sometimes claimed it
as her birthplace.

Anthropological and folkloric fieldwork
Hurston traveled extensively in the Caribbean and the American South
and immersed herself in local cultural practices to conduct her
anthropological research. Her work in the South, sponsored from 1928 to
1932 by Charlotte Osgood Mason,[20] a wealthy philanthropist, produced
Mules and Men in 1935, often regarded as a folklore classic, as well as
the base material for novels like Jonah's Gourd Vine published in 1934.
In 1936 and 1937, she traveled to Jamaica and to Haiti with support
from the Guggenheim Foundation from which her anthropological work Tell
My Horse published in 1938 emerged.
She also lived in Honduras, at the north coastal town of Puerto Cortés
from October 1947 to February 1948. Her trip to Central America was
apparently occasioned by the idea of locating either Mayan ruins or
vestiges of some other as yet undiscovered civilization. While in
Puerto Cortés, she wrote much of Seraph on the Suwanee, a book which
had nothing to do with Honduras. Hurston expressed interest in the
polyethnic nature of the population in the region (many of whom, such
as the Miskito Zambu and Garifuna were in fact of partial African
ancestry).

In 1948, Hurston was falsely accused of molesting a ten-year-old boy;
although the case was dismissed after Hurston presented evidence that
she was in Honduras when the crime supposedly occurred in the U.S., her
personal life was seriously disrupted by the scandal.

Posted by Prospector at 11:10 AM No comments:

Posted by Prospector at 9:36 AM No comments:

Posted by Prospector at 9:02 AM No comments: