Bill Moyers on the Secretive CorporateLegislative Body Writing Our Laws

A must see presentation on how laws are being written other than by and for the people.

Posted by Prospector at 10:36 AM No comments:

A disturbing video exposes  racist assault.  I have one question, can you spot the COWARD?


Oh and I see he's listed here, I wonder what he's doing for the federal government?

EO 10925
By the time John F. Kennedy was elected President, it was evident that to advance equal employment opportunity federal involvement needed to be broader and more proactive. On March 6, 1961, shortly after JFK took office, he signed Executive Order 10925, opening a new chapter in achieving access to good jobs by requiring government contractors to "take affirmative action to ensure that applicants are employed, and that employees are treated during employment, without regard to their race, creed, color or national origin."
Executive Order 10925 gave federal contracting agencies authority to institute procedures against federal contractors who violated their EEO obligations-including contract cancellation, debarment from future contracts and other sanctions.
It also created the President's Committee on Equal Employment Opportunity, which upon passage of the Civil Rights Act in 1964 became the Equal Employment Opportunity Committee. The President's Committee was chaired by Vice President Lyndon Johnson and later by Vice President Hubert Humphrey. The Committee's vice chair was Secretary of Labor Willard Wirtz.
Like its predecessors, EO 10925 gave each federal department and agency Executive Order enforcement responsibility for its contractors, and each developed its own organizational approach to carrying out these responsibilities. The President's Committee oversaw issues of policy and the Department of Labor played a coordinating role.  Read more


For more details see story at The Intersection of Madness and Reality
Posted by Prospector at 8:01 AM No comments:

Lance's Blog: Senator Bernie Sanders: "I will be damned if we’re...

Lance's Blog: Senator Bernie Sanders: "I will be damned if we’re...: "This country does in fact have a serious deficit problem," he said to about 200 people packed in the Senate Budget Committee room. 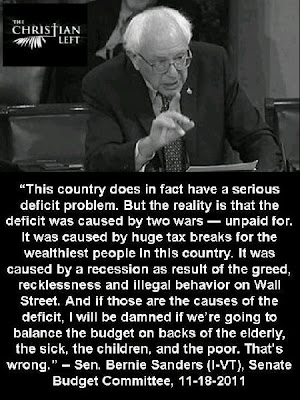 Posted by Prospector at 12:02 AM No comments: