Posted by Prospector at 9:22 PM No comments: Sharecropper's daughter, Fannie Lou Hamer delivers a moving anti war speech at UC Berkeley in 1969. She asks how can America Fight to supposedly free people in Viet Nam while her own citizens are not free?  Listen to her speak on Black Media Archive (this link is a bit slow try the one below)


Speech to DNC   Click on the image to watch the video. 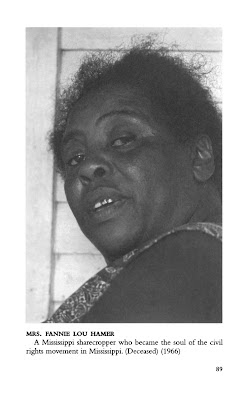 Fannie Lou Hamer was born in the Mississippi River Delta region. She was the granddaughter of a slave and the youngest of 20 children. Her parents were sharecroppers, farmers who give up a share of their crop to pay their rent. She became an organizer for civil rights groups in southern Mississippi. Hamer went door-to-door throughout the region to register people to vote, often using gospel songs and language that everyone could understand to get her message across. Her talent as a speaker and her dedication to equal rights helped Hamer develop into one the most important regional leaders of the Civil Rights movement.
Her success in rural Mississippi eventually led her to become a leader in SNCC (Student Nonviolent Coordinating Committee), one of the nation’s largest civil rights groups in the early 1960s. Despite having her life threatened, being fired from her job, and nearly dying from being beaten by white police officers in prison, she remained dedicated to the cause of civil rights throughout her life.

Hamer made national news as the Vice-Chairperson of the Mississippi Freedom Democratic Party, a political group trying to draw attention to voting discrimination at the 1964 Democratic National Convention. Her group challenged the all-white Mississippi Democratic Party, saying it didn’t fairly represent all the people of the state since most black people hadn’t been allowed to vote. She spoke on national television of the struggle for civil rights in Mississippi , and her group was given the right to participate in the Convention. In addition, the national Democratic Party ruled that in the future, if a state illegally denied anyone the right to vote, its delegation would not be allowed to participate in the Convention.

During the Civil Rights Movement, people who protested peacefully were often arrested for doing so. In this instance, a group of teenage girls was put in prison for demonstrating for equal rights. “Children’s Marches ” took place throughout the South and became important symbols for the national Civil Rights movement in the 1960s.