Email ThisBlogThis!Share to TwitterShare to FacebookShare to Pinterest
Labels: R.I.P. Whitney Houston, The Greatest Love of All, Women's History Month

Posted by Prospector at 5:45 PM No comments:

Posted by Prospector at 5:47 PM No comments:

I still remember sit-ins and boycotts of the late 50s and early 60's I was a young teenager at the time. I didn't participate in any sit-ins but I did have the opportunity to take part in the picketting of segregated swimming pools and other public establishments in Southern New Jersey. We also successfully boycotted for the hiring of Black employees at local supermarkets and a few other retail outlets that we patronized. I'll never forget when I boarded a bus with other local teens bound for Washington DC. It was a very exciting time, we recieved some coaching on the way regarding what to do and how to behave in case of trouble, we didn't know just what we would find at the end of our four and a half hour bus ride. It turned out to be one of the most impressive experiences of my life. Black Americans from all over America and other races including some from the international community as well had all come to express their desire to bring an end to the inequality that was being practised in the United States and to promote the adaptation of a Civil Rights policy that was necessary if America was to live up to it's claims as being a Nation of Justice.
I had just turned 17 at the time and most of the young people on the bus that day were about the same age it was quite a mix we were young men and women, Black, White, Asian, Jewish and Native Americans, rich and poor. Some of the kids I knew but most I was meeting for the first time and we were all prepared to  face whatever  we had to in order to make America a better place everyone.

In 1960 four freshmen from North Carolina Agricultural and Technical College in Greensboro walked into the F. W. Woolworth store and quietly sat down at the lunch counter. They were refused service, but they stayed until closing time. The next morning they came with twenty-five more students. On the third day, sixty-three students joined the sit-in. On the following day, the students were joined by three white female students from the Women’s College of the University of North Carolina, and by the fifth day Woolworth had more than three hundred demonstrators at the store. The next day the company said they were willing to negotiate, but only token changes were made. The students resumed their sit-ins, the city adopted more stringent segregation policies, and forty-five students were arrested and charged with trespassing. The students were so enraged by this that they launched a massive boycott of stores with segregated lunch counters. Sales dropped by a third, forcing the store owners to relent. Six months from the very first sit-in, the four freshmen returned and were served at Woolworth’s lunch counter.
Within a year similar peaceful demonstrations took place in over a hundred cities North and South. At Shaw University in Raleigh, North Carolina, students formed their own organization, the Student Nonviolent Coordinating Committee (SNCC, pronounced “Snick”). The students’ bravery in the face of verbal and physical abuse led to integration in many stores even before the passage of the Civil Rights Act of 1964. 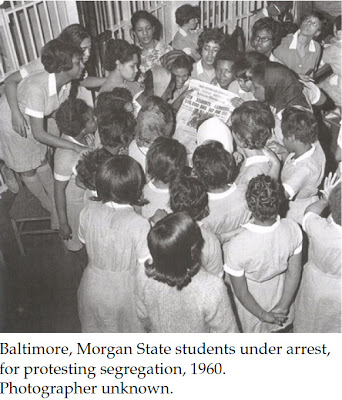 The Freedom Rides  pt. 2
Posted by Prospector at 5:15 PM No comments: 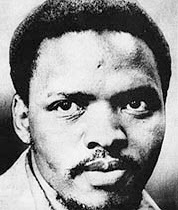 With the ANC and the PAC banned and African political activity officially limited to government-appointed bodies in the homelands, young people sought alternative means to express their political aspirations. In the early 1960s, African university students looked to the multiracial National Union of South African Students (NUSAS) to represent their concerns, but, as this organization adopted an increasingly conservative stance after Vorster's crackdown, they decided to form their own movement. Led by Steve Biko, an African medical student at the University of Natal, a group of black students established the South African Students' Organisation (SASO) in 1969 with Biko as president. Biko, strongly influenced by the writings of Lembede and by the Black Power movement in the United States, argued that Africans had to run their own organizations; they could not rely on white liberals because such people would always ally in the last resort with other whites rather than with blacks. He argued that blacks often oppressed themselves by accepting the second-class status accorded them by the apartheid system, and he stressed that they had to liberate themselves mentally as well as physically. He rejected, however, the use of violence adopted by the ANC and the PAC in the early 1960s and emphasized that only nonviolent methods should be used in the struggle against apartheid.
Biko's message had an immediate appeal; SASO expanded enormously, and its members established black self-help projects, including workshops and medical clinics, in many parts of South Africa. In 1972 the Black Peoples' Convention (BPC) was set up to act as a political umbrella organization for the adherents of black consciousness. Although the government had at first welcomed the development of black consciousness because the philosophy fit in with the racial separation inherent in apartheid, it sought to restrict the activities of Biko and his organizations when these took a more overtly political turn. In 1972, SASO organized strikes on university campuses resulting in the arrest of more than 600 students. Rallies held by SASO and the BPC in 1974 to celebrate the overthrow of Portuguese colonialism in Angola and Mozambique resulted in the banning of Biko and other black consciousness leaders and their arraignment on charges of fomenting terrorism.

Posted by Prospector at 5:02 PM No comments:

These damned elite institutions and corporations hold all the footage, photographs and documents of African Americans and other undeprrivileged groups in the U.S. but they charge astronomical rates and fees for people to use them, hence making these materials inaccessible to those disadvantaged people who want to tell their own stories.

Everything I'm filming will one day be worth GOLD and I swear I will never allow anybody to charge $15,000 just so some fat cat can sit pretty while others wallow in ignorance!

Posted by Prospector at 4:52 AM No comments:

Posted by Prospector at 6:00 AM No comments:

Nina Simone - Why? (The King of Love is Dead) [Full Live Version]

Posted by Prospector at 2:53 PM No comments:

Should I Say "Black" or "African American"? Good question.

Should I Say "Black" or "African American"?
I came on a site that posed this question and I was impressed with the interesting comments that were contributed. I'm not going to say much about it myself but I think you'll find the scope of responses thought provoking to say the least.  -- Good one wiseGEEK


Click the following link to see the article.
http://www.wisegeek.com/should-i-say-black-or-african-american.htm

Posted by Prospector at 1:15 AM No comments:

See this very interesting sequence of videos comparing the words of Malcolm X and Martin Luther King. This is the first time I've seen them presented like this. Do you believe they were more alike than different, in their ideas?

Just shaking My Head.  Listen carefully for the unconcious racism of the interviewer.

Born and raised in Halifax, Viola Desmond trained as a teacher but soon joined her husband Jack Desmond in a combined barbershop and hairdressing salon, a beauty parlour on Gottingen Street. While expanding her business across the province, Viola went to New Glasgow in 1946.

In New Glasgow, Desmond developed car trouble and decided to go to the movies while repairs were made. She bought a ticket, entered the theatre and took a seat on the main floor, unaware that tickets sold to African Canadians in this town were for the balcony and the main floor was reserved solely for White patrons. Theatre staff demanded that she go to the balcony, but she refused, since she could see better from the main floor. The police were summoned immediately and she was dragged out, which injured her hip. She was charged and held overnight in jail; she was not advised of her rights.

Maintaining her dignity, Desmond remained sitting upright, wearing her white gloves (a sign of sophistication and class at the time). The following morning, despite not having done anything wrong, she paid the imposed fine of $20. Besides being fined, she was charged with defrauding the Government of Nova Scotia of the difference in the tax between a ground floor and a balcony seat, which amounted to one cent.

While discussing the incident with the doctor who tended to her, Desmond decided to fight the charges. Clearly, the issue was about her being African Canadian and there being a racist seating policy in place; it was not about tax evasion. In taking the matter to the courts, Viola Desmond's experience helped to galvanize public opinion locally and internationally, and to raise awareness about the reality of Canadian segregation.
Posted by Prospector at 11:25 AM No comments:

Posted by Prospector at 2:39 AM No comments:

Richie Havens - What About Me ?

Posted by Prospector at 2:31 AM No comments:

Posted by Prospector at 1:12 PM No comments: