Historian Gerald Horne is interviewed by  ImportantCool (a worker-owned digital magazine).
Horne gives us examples of the historical state of race relations, class and colonialism to describe the vulnerable condition of the #BlackLivesMatter movement today.

Posted by Prospector at 7:35 AM No comments:

Trump watch and more. The war on Black on Black Violence.

This is to remind all to be careful around this guy.

Do we really want this character fiddling in our neighborhoods?

Posted by Prospector at 11:30 PM No comments:

Scientist Tyrone Hayes on Being Targeted By Herbicide Firm Syngenta 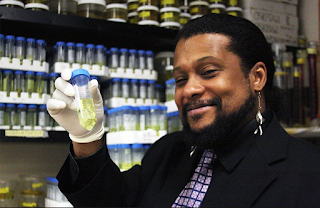 Tyrone B. Hayes (born July 29, 1967) is an American biologist and professor of Integrative Biology at University of California, Berkeley known for his research findings concluding that the herbicide atrazine is an endocrine disruptor that demasculinizes and feminizes male frogs. He is also an advocate for critical review and regulation of pesticides and other chemicals that may cause adverse health effects. He has presented hundreds of papers, talks, and seminars on his conclusions that environmental chemical contaminants have played a role in global amphibian declines and in the health disparities that occur in minority and low income populations. His work has been contested by Syngenta, the Swiss manufacturer of atrazine and the Australian Pesticides and Veterinary Medicines Authority. It was used as the basis for the settlement of a multimillion-dollar class-action lawsuit against Syngenta.

Posted by Prospector at 12:03 PM No comments:

Black Parents Explain How to Deal with the Police