"Riley B. King (born September 16, 1925), known by the stage name B.B. King, is an American blues musician, singer, songwriter, and guitarist.
Rolling Stone magazine ranked him at No. 6 on its 2011 list of the 100 greatest guitarists of all time (previously ranked No. 3 in the 2003 edition of the same list), and he was ranked No. 17 in Gibson's "Top 50 Guitarists of All Time". According to Edward M. Komara, King "introduced a sophisticated style of soloing based on fluid string bending and shimmering vibrato that would influence virtually every electric blues guitarist that followed."" (more)

Posted by Prospector at 5:12 AM No comments:

Email ThisBlogThis!Share to TwitterShare to FacebookShare to Pinterest
Labels: #AfricanAmericanMusicAppreciationMonth

"If We Must Die" Claude McKay 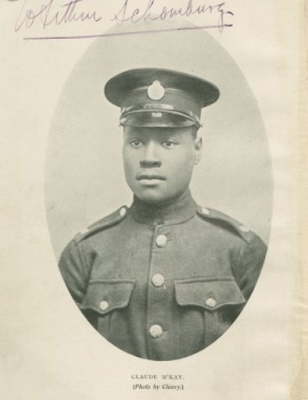 Festus Claudius "Claude" McKay (September 15, 1889  – May 22, 1948) was a Jamaican-American writer and poet, who was a seminal figure in the Harlem Renaissance. He wrote four novels: Home to Harlem (1928), a best-seller that won the Harmon Gold Award for Literature, Banjo (1929), Banana Bottom (1933), and in 1941 a manuscript called Amiable With Big Teeth: A Novel of the Love Affair Between the Communists and the Poor Black Sheep of Harlem that has not yet been published.[2] McKay also authored collections of poetry, a collection of short stories, Gingertown (1932), two autobiographical books, A Long Way from Home (1937) and My Green Hills of Jamaica (published posthumously), and a non-fiction, socio-historical treatise entitled Harlem: Negro Metropolis (1940). His 1922 poetry collection, Harlem Shadows, was among the first books published during the Harlem Renaissance. His Selected Poems was published posthumously, in 1953.  see Wikipedia

Posted by Prospector at 9:33 AM No comments: