Magical things happen when we give young people permission and the opportunity to share their innermost feelings with us. It's so encouraging to see the enthusiam with which these young people embrace life and allow their experiences and feelings to be exposed to the community.
This effort is an excellent example of how different generations of the village can come together and build for the future.

Posted by Prospector at 5:00 PM No comments:

Author of "Lift Every Voice and Sing"

born in Jacksonville,
Florida, where he attended the
Public Schools. In 1894 he grad
uated from Atlanta University,
with the degree of A. B., and he
received the degree of A. M. from
the same University in 1904. Mr.
Johnson also spent three years in post graduate
work at Columbia University, in the City of New
York. In 1917, the honorary degree of Litt. D.,
was conferred upon him by the Talladega College,
Talladega, Alabama. 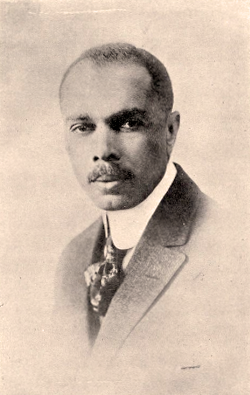 For several years, Mr. Johnson was princi-
pal of the Colored high school at Jacksonville. He
was admitted to the Florida Bar in 1897, and prac
ticed law in Jacksonville until 1901, when he re
moved to New York to collaborate with his bro
ther, J. Rosamond Johnson, in writing for the light
opera stage.

In 1906, he was appointed United States Consul
at Puerto Cabello, Venezuela, being transferred as
Consul to Corinto, Nicaragua, in 1909, and to the
Azores in 1912. While in Corinto, he looked after
the interests of his country during the stormy days
of revolution which resulted in the downfall of
Zelaya, and through the abortive revolution against
Diaz.

His knowledge of Spanish has been put to use
in the translation of a number of Spanish plays. He
was the translator for the English libretto of "Goy-
escas," the Spanish grand opera produced by the
Metropolitan Opera Company in 1915. Mr. Johnson
also has several French translations to his credit.
Mr. Johnson is well known throughout the coun
try as the Contributing Editor of the New York
Age. He added to his distinction as a newspaper
writer by winning in an editorial contest, one of
three prizes offered by the Philadelphia Public
Ledger, in 1916.

During the fall of 1916 Mr. Johnson went on a
six weeks mission throughout the South, when he
interviewed the editors of the leading white news
papers and talked with them regarding the atti
tude they should take on the exodus of Negro la
bor, which was then reaching its height, and upon
the whole Negro question.

Mr. Johnson contributes to various magazines
and periodicals. His poems have appeared in the
Century, the Independent, the Crisis and other pub
lications. He is the author of a novel, "The Auto
biography of an Ex-Colored Man," and a volume
of poems, "Fifty Years and Other Poems." He is
a member of the American Society of Authors and
Composers, the American Sociological Society, and
of the Civic Club of New York, and is the Field Se
cretary of the National Association for the
Advancement of Colored People.

It is as a writer that Mr. Johnson is best known.
His novel, "The Autobiography of an Ex-Colored
Man" aroused considerable comment, and his re
cent volume of poems, "Fifty Years and Other
Poems" has been favorably reviewed by a num
ber of the best critics of the country Professor
Branden Matthews, of Columbia University, in his
introduction which he wrote for the book, says of
Mr. Johnson and his work, "But where he shows
himself a pioneer is in the half-dozen larger and
bolder poems, of a loftier strain, in which he has
been -nobly successful in expressing amply the
higher aspirations of his own people. It is in ut
tering this cry for recognition, for sympathy, for
understanding, and, above all, for justice, that Mr.
Johnson is most original and most powerful."

Mr. Elias Lieberman, in the American Hebrew,
says of him, "James Weldon Johnson is not only
versatile but more than that sincere. He has con
tinued to do for the Negro race what Paul Law
rence Dunbar began so inimitably. He has thrown
the illuminating light of interpretation upon lives
which for so many of us are puzzles."

The following was taken from a tribute to him
in the Boston Evening Transcript :

"And in other verses that strike a universal note
there is more often both felicity of conception and
expression. Particular reference should be made
to .Mr. Johnson's poem, "The Young Warrior,"
which, set to music by Mr. Harry T. Burleigh, has
been sung throughout Italy as a martial song in
spiring the Italian soldier on his way to the front.
The pieces in Negro dialect are characteristic of
work of this kind and Mr .Johnson's possesses the
usual intensity of pathos and the usual humorous
abandon. One notes particularly, however, in the
dialect verses in this volume, the absence of
coarseness, of crudity, in the humor which has
more or less pervaded the racial writers of dialect
since Dunbar. Mr. Johnson, if he has done noth
ing else to enhance the value of this kind of speech
in verse, has given it a quality of refinement."

See also (Excerpt from: Essay on the Negro's Creative Genius)
Posted by Prospector at 4:02 PM No comments:

Nikki Giovanni was born (Yolande Cornelia Giovanni, Jr) on June 7, 1943.
She graduated with honors from Fisk University in 1967. She published
her first book of poems, Black Feeling, Black Talk in 1968.
Since the late 1960s she has been a resonant voice in the African American
community, as well as an prominent force in the Black Arts movement.

Some literal consciousness on Youtube from sistah Giovanni with love.


Posted by Prospector at 1:46 PM No comments: 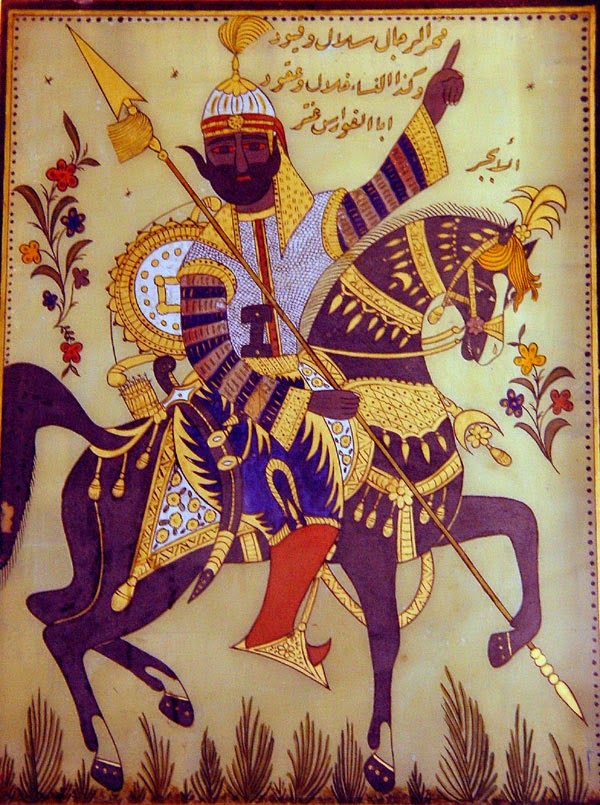 Posted by Prospector at 2:26 PM No comments: 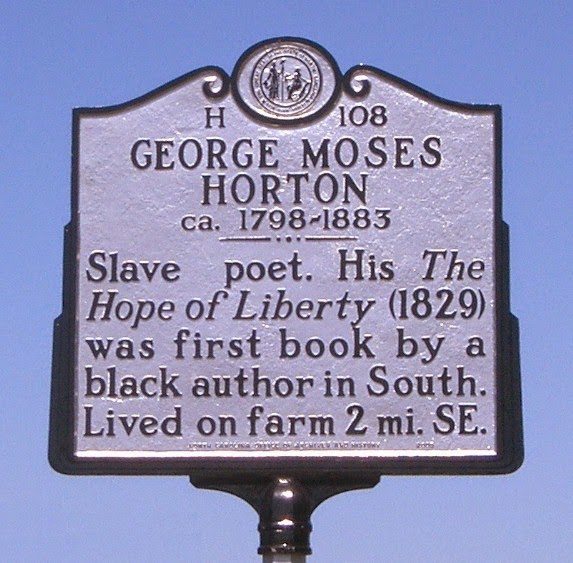 Posted by Prospector at 1:44 PM No comments: 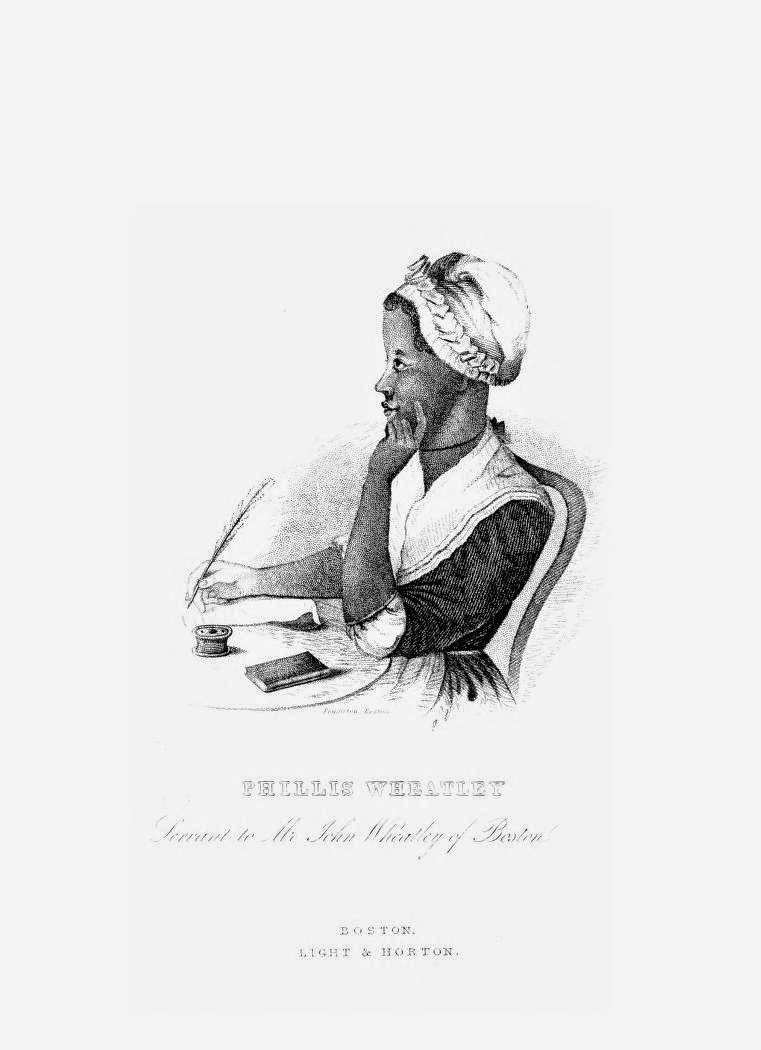 TO S. M., A YOUNG AFRICAN PAINTER,
On seeing his Works.

To show the lab 'ring bosom's deep intent,
And thought in living characters to paint,
When first thy pencil did those beauties give,
And breathing figures learnt from thee to live,
How did. those prospects give my soul delight,
A new creation rushing on my sight !
Still, wondrous youth ! each noble path pursue ;
On deathless glories fix thine ardent view :
Still may the painter's and the poet's fire,
To aid thy pencil and thy verse conspire !

Memoir and poems of Phillis Wheatley, a native African and a slave  also, Poems by a slave (1864)

Posted by Prospector at 1:42 PM No comments: