Seven Shades Of Pale is a National Film Board of Canada presentation that takes us into the lives of rural Black Nova Scotians. We get a sense of what life was like in 1975 for these folks and they speak about what it was like before that as well. We get to meet the younger and the older generation
and learn something about their experiences in Nova Scotia. I'm sure you will find this video entertaing and educational.


I'm sorry this video is no longer available on youtube you can see a bit about it on the web site of The National Film Board of Canada (click to see)
Posted by Prospector at 12:54 AM No comments:

Along the coastline of Namibia runs the Namib desert, a 1,200 mile long strip of unwelcoming sand dunes and barren rock. Behind it is the central mountain plateau, and east of that the Kalahari desert. Namibia's scarcest commodity is water: this is a country of little rainfall, and the rivers don't always run. But the very sand of the Skeleton Coast is the dust of gemstones; uranium, tin and tungsten can be mined in the central Namib, and copper in the north; and in the south there are diamonds. Namibia also has gold, silver, lithium, and natural gas. For most of the region's history, only metal was of interest to the native tribes. These tribes lived and traded together more or less peacefully, each with their own particular way of living, wherever the land was fertile enough. The San were nomads, hunters and gatherers. The Damara hunted and worked copper. The Ovambo grew crops in the north, where there was more rain, but also worked in metal. The Nama and the Herero were livestock farmers, and they were the two main tribes in the 1840s when the Germans (first missionaries, then settlers, then soldiers) began arriving in South West Africa.
see more

To this day the original people have yet to be compensated for lands or left with suitable means of sustaining themselves, what has changed exactly?

Posted by Prospector at 2:15 PM No comments: 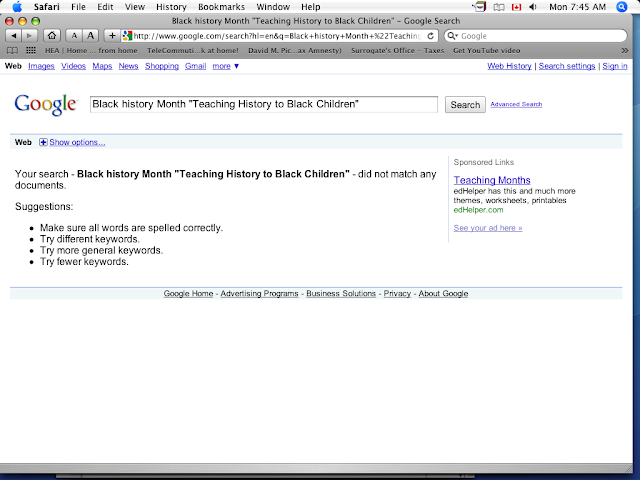 This google search came up blank. Not one match for the string search "Teaching History to Black Children" was found. Does this say anything to you?  Any Black bloggers, authors, teachers, community organizers have any ideas about this? Ya know if we don't do it someone else will.
Posted by Prospector at 7:59 AM No comments: