Turn of the century black sailors. 
Seamen on the whaling bark Wanderer make ready to cast off for another voyage. The exact location is unknown, but probably New England.
Whaling: Opportunities for African Americans in a Hard Business

The whaling industry, centered until the 1870s in New Bedford, employed a large number of African Americans. This was in part due to the Quaker tradition of tolerance in the New Bedford area, but more importantly, to the large demand for manpower in an expanding industry requiring unusually large crews.

Some black seamen in the business were Americans, from the Northeast and the South, some were from the West Indies, and a significant group was from the Cape Verde Islands off the African coast. Whatever their origin, black seamen found acceptance as hard workers and skilled mariners in an industry that was physically demanding, dirty, and often financially unrewarding.

When the center of the industry moved to San Francisco in the 1870s, African Americans continued to form a large percentage of the crews. The whaling business was no doubt the largest employer of African Americans seamen on the West Coast until it ended shortly before World War I.

William T. Shorey (1859-1919) was a famous captain in the last days of whaling. He was born in Barbados, the son of a Scottish sugar planter and an Indian creole woman. Shorey began seafaring as a teenager and in 1876 he made his first whaling voyage.

Whaling brought him to California and he married the daughter from a leading African American family in San Francisco. In 1886 he became the only black West Coast ship captain. Known for his skill and leadership, Shorey experienced many adventures and dangers at sea with multiracial crews before his retirement in 1908.

Over time, larger, steam-powered vessels took the place of obsolete sailing ships and black seamen were forced to accept inferior employment on ships as cooks and stewards. The era of significant participation by blacks in whaling ended in 1923 when the Wanderer went aground off Nantucket, MA. The crew of the British ship Rathdown,
photographed in San Francisco in 1892.
The two men in aprons are the cook  and
steward but the other black men are all seamen.

Black men were often found among the crews of British ships, and even some German and Scandinavian ships, calling at West Coast ports. Black faces appear in about one quarter of all the foreign flag crew photographs in the park's collections. In many cases the men are clearly cooks or stewards, but in a surprising number of photos the men are obviously seamen, living and working on terms of complete equality with other members of the crew. The majority of black seamen in British ships were probably from the West Indies, but we do not have references for African Americans hired as seamen in foreign ships at New York and other East Coast ports.


The Navy: A Mixed Legacy
Throughout most of its history, the Navy has followed a policy of employing African Americans in all enlisted grades. They were active in both naval and privateer crews during the Revolutionary War. A brief period of discrimination ended with the War of 1812. From then until 1915 African Americans served in the ranks of all naval vessels. During the Civil War, at least six African Americans were awarded the Congressional Medal of Honor. Only officer ranks were closed to them during this period.
In 1915 an executive order from President Wilson ordered segregation for all branches in the military. Until 1942 African Americans were recruited only as messmen. During the rest of World War II, opportunities for African Americans gradually expanded and the first twelve officers were commissioned in 1944. In 1946 a Navy order finally ended official segregation throughout the Navy.
Desegregation in practice took somewhat longer to achieve, but was finally accomplished, and today the Navy can once again take pride in its tradition of racial equality.


Although the Navy had no commissioned officers in the 19th century, this restriction did not hold for the Revenue Service, the predecessor of the modern Coast Guard.
Captain Healy, an African American, rose to the rank of Captain in 1883. From 1886 until 1895 Healy commanded the Bear, a steam barkentine, on patrols in the North Pacific, Bering Sea, and Arctic Ocean. The Bear was virtually the only law in these Northern regions, enforcing quotas in the sealing industry, protecting native people from exploitation, and keeping the peace among white settlers. She performed many feats of heroic rescue among the whaling fleet and the isolated outposts of trappers and hunters.
Captain Healy was known as a stern disciplinarian, and was accused of brutalizing his seamen on at least one occasion. Although formally exonerated from these charges, it is no doubt true that he was a hard man, performing a difficult and demanding duty.


This information thanks to the National Parks Service  (NPS)
Posted by Prospector at 3:26 AM 1 comment: Links to this post

On January 17th, 1961, after being beaten and tortured, the Congolese prime minister, Patrice Lumumba, was shot and killed.

I found this clip on "youtube" and thought I'd share it.
Black History Month is a good time to recall those who gave their lives.

Background:
After a long struggle, the Congolese were finally free from Belgian occupation and the great independence leader, Lumumba was democratically elected to rule over the new government.

During the official independence celebration the new prime minister, Lumumba, gave a fiery unrehearsed speech in the presence of African leaders and the King of Belgium, who naturally felt a bit uncomfortable.

A few months later, Lumumba was assassinated even though he had the leadership and vision to create a prosperous Congo and Africa. Many think that some foreign leaders did not like him because he could not be tamed.

See a Democracy Now report Lumumba 50 Years Later
Posted by Prospector at 5:03 PM No comments: Links to this post

Posted by Prospector at 1:53 PM No comments: Links to this post Demonstrators walk down a street during the civil rights march from Selma to Montgomery, Alabama in 1965.
(Peter Pettus. 1965. Library of Congress Prints and Photographs Division. Lot 13514, no. 25. 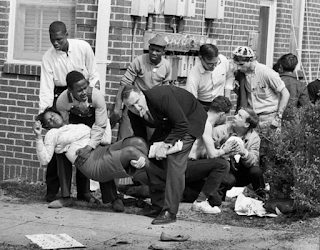 John Lewis (on right in trench coat) and Hosea Williams (on the left) lead marchers across the Edmund Pettus Bridge.
On Sunday March 7, 1965, about six hundred people began a fifty-four mile march from Selma, Alabama to the state capitol in Montgomery. They were demonstrating for African American voting rights and to commemorate the death of Jimmie Lee Jackson, shot three weeks earlier by an state trooper while trying to protect his mother at a civil rights demonstration. On the outskirts of Selma, after they crossed the Edmund Pettus Bridge, the marchers, in plain sight of photographers and journalists, were brutally assaulted by heavily armed state troopers and deputies.

One hundred years after the Civil War, in many parts of the nation, the 15th Amendment had been nullified by discriminatory laws, ordinances, intimidation, violence, and fear which kept a majority of African Americans from the polls. The situation was particularly egregious in the city of Selma, in Dallas County, Alabama, where African Americans made up more than half the population yet comprised only about 2 percent of the registered voters. As far back as 1896, when the U.S. House of Representatives adjudicated the contested results of a congressional election held in Dallas County, it was stated on the floor of Congress:
…I need only appeal to the memory of members who have served in this House for years and who have witnessed the contests that time and time again have come up from the black belt of Alabama—since 1880 there has not been an honest election in the county of Dallas… 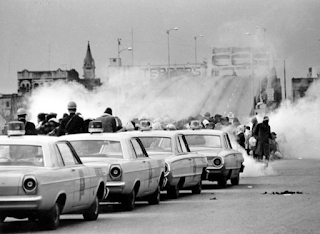 Posted by Prospector at 1:16 PM No comments: Links to this post