Muhammad Ali -Then And Now (Documentary with David Frost)


Ali revolutionized the sport of boxing by sheer power and magnetism of his personality.
(not to mention his speed and power)  At a time when most fighters let their managers do the talking, Ali thrived in — and indeed craved — the spotlight, where he was sometimes provocative, frequently outlandish and almost always entertaining.
He controlled most press conferences and interviews, and spoke freely about issues unrelated to boxing. He transformed the role and image of the African American athlete in America by his embrace of racial pride and his willingness to antagonize the white establishment in doing so.  In the words of writer Joyce Carol Oates, "he was one of the few athletes in any sport to completely define the terms of his public reputation."
Wikipedia

Posted by Prospector at 4:58 PM No comments:

Amiri Baraka Speaks to the Importance of African-American History

Well, Amiri Baraka has passed on but before he transitioned he paid a tribute
to Martin Luther King Jr. and left us with the message that we must never
forget the story of our struggle for justice and equality and we have to continue
to pass that message to future generations and continue to prepare them to
move our struggle forward, until such time as we reach our goal.

I hope you'll listen to and pass this video on to anyone that you think can
benefit from the contents of this important message.

Posted by Prospector at 8:36 PM No comments:

What do you think of the quality of the discussion here?
How much do you think has changed since this video was created?
How much more needs to be done?

Posted by Prospector at 4:21 PM No comments:

A blog created by George-McKinley Martin, a Washigton D.C. art librarian, historian, and collector.
Posted by Prospector at 2:23 PM No comments:

The Homesteader A novel by Oscar Micheaux 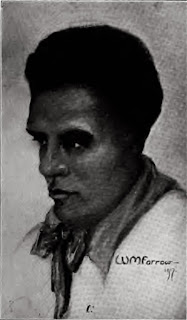 Posted by Prospector at 10:35 AM No comments:

How Mandla Maseko, son of a toolmaker, lept into the space program.

25-Year-Old DJ to Become 1st Black South African in Space
Posted by Prospector at 8:02 AM No comments: